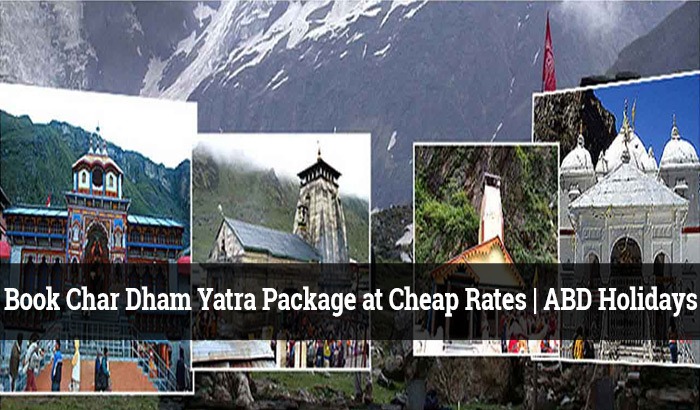 The pilgrimage to the four abodes, the Char Dham Yatra indicates the four holiest pilgrimage sites in India, i.e. Yamunotri, Gangotri, Kedarnath, and Badrinath. Being a small circuit, it is also known as the Chhota Char Dham Yatra. This yatra was renowned after the Indo-China war of 1962 as India began investing in road and infrastructure development projects.

Yamunotri is the first place covered by the Char Dham Yatra Package of ABD Holidays. Also known as the seat of Goddess Yamuna, Yamunotri is the source of the Yamuna River. The actual glacier is located at an altitude of 4421 meters above sea level, which is about 1 km further up. But that is not accessible easily. Du to the same reason, the shrine has been situated at the Yamunotri Temple at the foot of the hill. Pilgrims offer prayers at the same temple.

As per a popular legend, sage Asit Muni who had his hermitage at this place, bathed daily in both Ganga and Yamuna. Due to his old age, when he could no longer go to Gangotri, a stream of the River Ganga appeared opposite Yamunotri for him to bathe.

Gangotri is the second place covered by the Char Dham Yatra Package of ABD Holidays. Also known as the seat of Goddess Ganga, Gangotri is frequently visited by millions of pilgrims each year. The Gangotri Dham has situated 19 km from Gaumukh, which is the place where the Ganga River originates. From Gaumukh in the Gangotri Glacier, the river flows from Bhagirathi up to Devprayag, where it merges with Alakananda and forms Ganga, as we all know it.

As per Hindu mythology, Goddess Ganga took the form of the river for cleansing the ashes and liberating the souls of King Bhagiratha’s predecessors when Bhagiratha meditated to please the goddess. For minimizing the impact of her fall, Lord Shiva placed her in his matted locks. At the point of impact, the goddess was known as Bhagirathi.

Kedarnath is the third place covered by the Char Dham Yatra Package of ABD Holidays. Situated near the head of the River Mandakini in the Himalayas, Kedarnath is bounded by breathtaking snow-clad mountains. This city is named after King Kedar who ruled in the Satyuga. The king is believed to be the ruler of the 7 continents. His daughter Vrinda is believed as a partial incarnation of Goddess Laxmi.

As per a popular legend, Nar & Narayana prayed in front of a Shivalingam in Badrikashraya of Bharat Khand. Pleased by their dedication and devotion, Lord Shiva granted them a boon. Both requested Shiva to take up a permanent seat as a Jyotirlinga at Kedarnath for freeing the devotees of Lord Shiva from all their miseries.

Badrinath is the fourth place covered by the Char Dham Yatra Package of ABD Holidays. The prime deity here is Lord Vishnu who is worshipped in his aspect of Badrinarayan. It is the only one that is a part of both the original Char Dham and the Chhota Char Dham circuits.

As per the Hindu epic Mahabharata, Badrinath is the place where Nar & Narayana, the dual forms of Lord Vishnu, meditated. This holy town has also been mentioned as a place that the Pandavas crossed en route to heaven.

Also known as the land of Gods, Uttarakhand is home to numerous temples and welcomes devotees all year round. Along with the countless religious circuits that devotees visit in Uttarakhand, the most prominent pilgrimage is the Char Dham. We, ABD Holidays, are providing the Char Dham Yatra Package at a cheap rate that incorporates the holy sites of Yamunotri, Gangotri, Kedarnath, and Badrinath. The Char Dham draws the most number of devotees in the nation, making it one of the principal hubs of religious travel in the country.

Things not included in our Char Dham Yatra Package

Abd Holidays Pvt. Ltd is a well-known Tours and Travel Agency in India providing the best services to our customers for over many years including the well-known Char Dham Yatra Package. We are providing you with every possible tourist destination tour all over India. We are also providing services in hotel bookings, air bookings, cruises, and car rentals. The prime motto of our business is customer satisfaction which can only be achieved through quality services. You can knock us at any time and from any place all around the world and we will be available.