What is the significance of the Char Dham Yatra for Hindus? 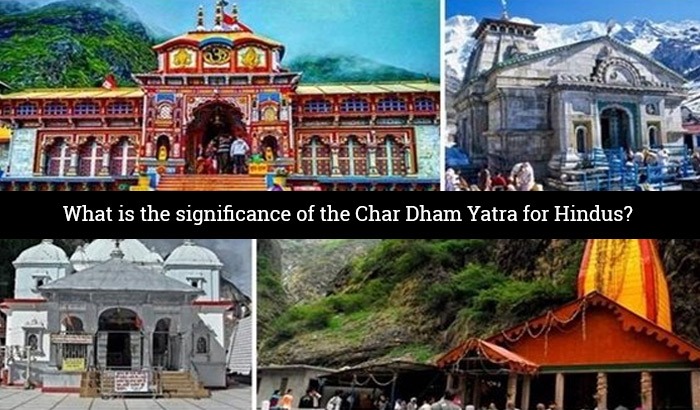 India is full of beautiful and scenic tourist places. Spiritual beliefs, cultural values, and heritage wonders are some of the major reasons influencing pilgrims to plan an expedition. Also known as the land of temples, India has plenty of sacred destinations and is undoubtedly a paradise for the seekers of tranquillity and spirituality.

The Importance of Char Dham Yatra

The Char Dham Yatra is considered a must-visit pilgrimage tour among Hindus in order to achieve salvation. Each year, more than 2 Lac pilgrims visit the holy shrines. As per Hindu mythology, it is believed that the Hindu philosopher Shri Adi Shankaracharya coined the term ‘Char Dham Yatra’. The literal meaning of this is the four abodes of God or Holy Destinations. These four shrines are in the region famous for several captivating mountains that are covered by a thick layer of snow and an unadulterated atmosphere.

The Yamunotri Dham is a preferred pilgrimage destination among the Char Dham Yatra for Hindus as it boasts Yamunotri which is the source of the sacred Yamuna River. There is a mythological story related to this holy river among the Hindus that the river was the sister of Yamraj and therefore on Bhai Dooj, Yamraj promised Goddess Yamuna that whosoever will take a dip in the river will not be taken to Yamlok and he will attain salvation. Yamunotri Dham, situated at the altitude of 3164 meters above sea level, sanctifies millions of visitors that visit this holy pilgrimage.

The highlight of the Gangotri Dham among Char Dham Yatra is Gomukh, which is the origin point of the Holy River Ganges. It is believed among devotees that after King Bhagirath meditated for a years, the river Ganga came to earth. The stone on which King Bhagirath meditated is placed near the Ganga Temple in Gangotri. Gangotri Dham is situated at an altitude of 3200 meters in the middle of imposing surroundings along the bank of the Bhagirathi river.

Shri Kedarnath Dham is a prominent pilgrimage for Hindus, being one of the twelve jyotirlingas of Lord Shiva, the God of destruction. Apart from the Char Dham yatra, Kedarnath Dham is also a part of the the Panch Kedar. Also, Kalpeshwar, Tungnath, Madhmaheshwar, and Rudranath shrines are together known as Panch Kedar. Adi Shankaracharya restored the temple of Kedarnath. It is named after the ruler of Satyuga ‘Kedar’ and the shrine is open from April end till the Kartik Poornima.

The major significance of Shri Badrinath Dham can be understood from the fact that it is said to be the most sacred among the four shrines. Situated at an elevation of 3,133 meters above sea level, the Badrinath Dham is on the left bank of the Alaknanda River. It is dedicated to Lord Vishnu, also known as the protector and preserver among the divine Hindu Trinity (Brahma, Vishnu, and Shiva). These sacred temples of Lord Vishnu are also called as Vishal Badri.

To get the best deals on the Char Dham Yatra package, please visit ABD Holidays. We are one of the best travel agencies based in Uttarakhand, providing world-class services and deals for you. For more information, contact our website or call us.