Everything to know about the Char Dham Yatra | ABD Holidays 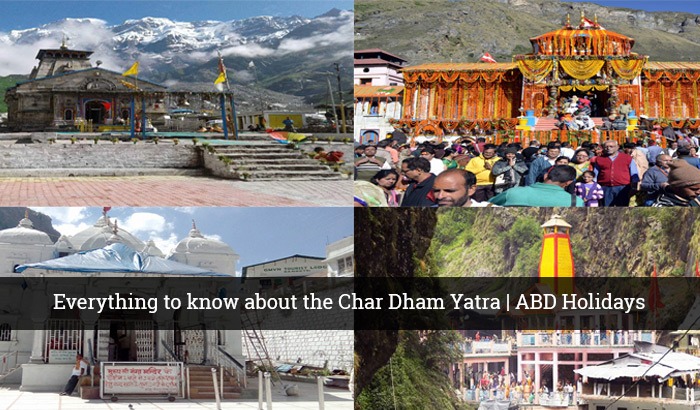 Nestled in the magnificent Himalayan lap is the ultimate center of all religious activities of the Hindu religion, the Char Dham yatra. It is a holy yatra and is a must-visit for all the religious people out there. The religious customs, practices, and beliefs make the place one of the most popular tourist spots. The Char Dham Yatra includes is the four sacred sites in Uttarakhand - Gangotri, Badrinath, Kedarnath, and Yamunotri. Every year, millions of people from all over the world visit the beautiful and sacred place with their family and friends.

The Geographical Location of the Char Dhams

The Char Dhams are situated in Uttarakhand at the height of 3133m above sea level. Char Dham Yatra begins with a visit to Yamunotri Dham through a 36 km drive from Barkot, followed by a 7 km trek. Barkot also connects to Uttarkashi which is about 100 km from the Gangotri Dham. Kedarnath can be driven from Rudraprayag, which is about 180 km from Uttarkashi, along with a 21 km trek up the mountain. Rudraprayag is also about 160 km away from the Badrinath Dham, which will be the final Dham in your Char Dham Yatra.

Climate and the best time to visit

If you want to plan a trip to some beautiful and holy places, then nothing can beat the Char Dham yatra. It is among the most divine religious spots for the Hindus, which is flocked by thousands of travelers each year. But whenever you plan to visit there, you must be well-acquainted with the climate. So, the peak season to go for Char Dham Yatra is from May to October.

You can easily visit there during the summer, winter and even in autumn. But you should avoid visiting the place during the monsoon, as it is not a safe time. During the monsoon season, the Char Dham Yatra route gets blocked due to the heavy rainfall and sometimes, landslides may also occur. Whenever you are planning for a Char Dham yatra, you should have to make sure that you research the place, climate, and other details properly.

Among all the four shrines of the Char Dham yatra package, you will start over your journey from the Yamunotri Dham. This is one of the most amazing places that truly fascinate travelers. It is situated at a height of 3,293 meters above sea level. The place is located on the top edge of Bandar Poonch Parvat. The source of the Yamuna River is the Champasar Glacier and which is located at an elevation of approx. 4,142 meters.

The second destination of the Char Dham Yatra package is the Gangotri Dham. The shrine is situated on the banks of the Bhagirathi River and at an elevation of 3,100 meters in the Himalayas. The Gangotri Dham is surrounded by the remarkable Garhwal Hills, at an altitude of 3048 meters above sea level.

The Badrinath Dham is enclosed by the two mountain ranges Nar and Narayan and is known for the Badrinath Temple. Cribbed to a grand Himalayan mountain, this place in Char Dham Yatra is one of the most appealing places on the earth. This is the last destination of Char Dham Yatra and is located in Garhwal Hills.

But nevertheless of all the difficulties and hardships of the arduous pilgrimage, millions of pilgrims take up the Char Dham Yatra each year. So, if you are a religious person and wish to offer prayer to God in their known abodes, it is time to head for a Char Dham Yatra.