The Importance of Do Dham Yatra in Hindu Religion 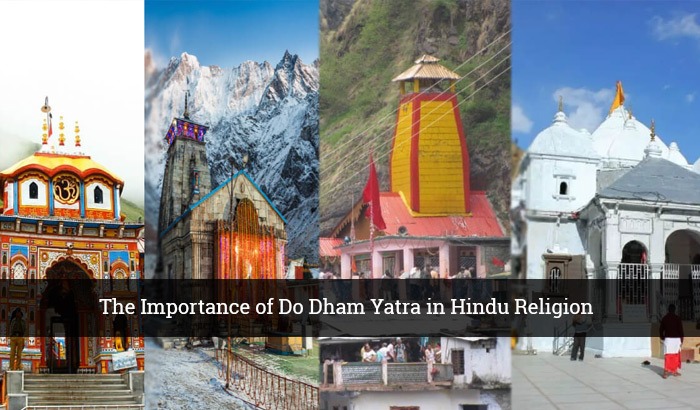 Being an incarnation of religious belief and solace, the Do Dham Yatra in Uttarakhand is world-renowned. It has been an aspect of major significance and role in Hindu mythology and Mahabharata. Being a believer, you might know the importance of Do Dham Yatra is unmissable. Do Dham Yatra package includes the holy pilgrimages of Kedarnath and Badrinath which are also part of the Chota Char Dham Yatra. The other two include Gangotri and Yamunotri.

The two main transit stops included in the Do Dham Yatra package are Dehradun airport and Haridwar railway station. There is also a variety of public transport services to select from. Do Dham Yatra by Helicopter is the most trending way of visiting the shrines in recent years. So, let us discuss more of the two most important pilgrimage centers of Do Dham Yatra – Kedarnath and Badrinath:

In case you want to do the Do Dham Yatra but have been late, you are left out with very less options. Most travel agencies do not provide last-minute booking facilities. But do not worry. With ABD Holidays, you will always have the option to enroll yourself for the Do Dham Yatra package at the last minute. Just contact us through our website and we will provide a slot for you anytime.

Considered one of the most important among the 12 jyotirlingas, Kedarnath is situated on the snow-class Garhwal Mountain Range with its temple near the Mandakini River. It is one of the most visited pilgrimage sites in India and a part of the Do Dham Yatra as well as the Char Dham Yatra. It has an exciting and enriching history of more than 1000 years. According to Hindu Mythology, it is believed that when Pandavas were praying for absolution from the guilt of killing Kauravas, after the battle of Mahabharata, Lord Shiva disguised himself as a bull to avoid granting them their wish.

When Pandavas discovered that the bull is Lord Shiva, he bumped into the ground with only the hump remaining outside. A temple was created by Pandavas on this site which was later known to be Kedarnath.

The incredible beauty of this place attracts a lot of visitors. From the snow-clad mountains to the iconic beauty of the Himalayan range, this place provides you with all the reasons to enjoy. A Rudrabhishek Puja is also performed every morning by the visitors and devotees to seek blessings from the Rudra Form of Lord Shiva.

Do Dham Yatra by Helicopter is one of the easiest ways to reach the Kedarnath Temple in a hassle-free way. The relevance and importance of the Do Dham Yatra are such that devotees wait for a six-month period until this temple is open. There are other attractions as well which you can visit if you want to explore more.

Located magnificently between the Nar and Narayan Mountain Range, Badrinath Temple is the 2nd pilgrimage site included in the Do Dham Yatra package and is also one of the most visited sites among devotees. This place equally allures adventure enthusiasts and nature lovers for its unparallel beauty.

Badrinath Temple was built in remembrance of Lord Vishnu who dedicated himself to mankind. As per ancient Hindu Mythology, it is believed that Lord Vishnu meditated for 1000 years under the Badri Tree for the protection and prosperity of mankind. Devotees drench themselves in the holy water of the Tapti Kund, which is an important aspect of Badrinath Yatra. This spring of hot water is considered the home to Lord Agni.

Vyas Gufa is yet another important aspect of the Do Dham Yatra where it is believed that Maharishi Vyas wrote Mahabharata with the help of Lord Ganesha. You can also visit Tibetan-Chinese to explore the Mana Village which is another breathtaking experience for the visitors.

Both Kedarnath and Badrinath temple remains open for six months, starting from April to October. If you want to have the best Do Dham Yatra tour experience along with all the facilities and amenities, ABD Holidays is all set to deliver you the same. Contact us for more details of the available Do Dham Yatra packages and enroll yourself in the heart-throbbing journey.